One of the biggest police vehicle collection in the world

The life and career of Achille Varzi, "the lord of the steering wheel" is being celebrated in the Visconteo Sforzesco Castle in Galliate

A private collection of about 20 motorcycles and 10 tractors.

Francesco Angelelli and his family has collected a beautiful and curious collection of tractors and classic cars. It is located inside the Acquarossa park, which is a "a leisure park, ideal place for children and adults... Inside the park you will find a scenic circular route that will guide visitors through the landscape of gently rolling hills, vineyards, olive groves and lakes and the activities and resources that Mr Angelelli was able to patiently create and grow until today". 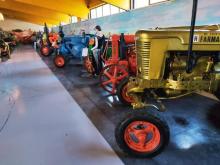 MV Augusta was a famous Italian motorcycle brand. It also produced helicopters - today it is part of AugustaWestland. This museum which was opened in 2002 features various motorcycles, including Giacomo Agostini's championship-winning bikes and a few helicopters, alongside photos, posters etc. 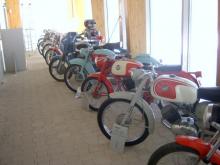 The Alfa Romeo Museum has been completely renovated and is even more prestigious. The historical site in Arese has a new look and is opened to public with a refined arrangement that reflects Alfa Romeo's distinctive DNA. Six floors of history binding past, present and future and complimenting the achievements of an extraordinary brand, its vehicles, its technology and style.

The Anzio Beachhead Museum is devoted to the Allied amphibious landing on 22 January 1944, along the coastline between Anzio and Nettuno, in Italy. The museum opened in 1994 for the 50th Anniversary of the landing. It comprises four sections: American, British, German and Italian. The exhibitions feature authentic uniforms, badges, documents, pictures, other artefacts and a few motorize vehicles donated by veteran organisations.

There are 60 motorcycles made between 1914 and 1970 and complete Ariel documentation.

In Montecchio, near Vicenza, the Venetian city there is an interesting museum dedicated to the Italian, German and American military vehicles used in the first and second world wars. A living and exciting history book to document the stark reality of conflicts.