"The Royal Automobile Museum is the first public automotive museum in the Arab region. Inaugurated by His Majesty King Abdullah II in 2003, it serves as a tribute to the late King Hussein while showcasing part of Jordan's history.The museum displays 80 of the late King's cars and motorcycles, some dating as back as 1909. Standing inpristine condition, each vehicle tells a unique story along the timeline of the late King's life. 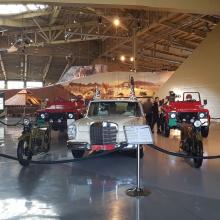